events taking place in the community, expressing her pain, families and organisations, feedback and support, Finsbury Park and Brixton, mental health and wellbeing, trying to find a job,

On Saturday 29th June the Rescue of Dignity Group (ROD) held its Inmates’ Family and Friends Day at the UCKG HelpCentre in Finsbury Park, North London.

With family members also serving the same sentence as their convicted loved one, the ROD Group decided to hold this event to support families who experience feelings of loss, hopelessness, social isolation as well as depression and other mental health issues, while at the same time trying to be strong for other family members.

The day started with Charles Ajorgbor, Head Coordinator of the ROD Group welcoming the audience.

The Victory Youth Group (VYG) presented 3 scenarios; the first being a wife and mother, expressing her pain, confusion and anger at her husband being incarcerated and the struggles she faces being alone with a teenage son. 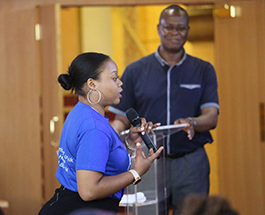 Cue Monique Joseph, first speaker and Engagement Officer for PACT, (Prison Advice and Care Trust), a national charity that supports inmates and their families from HMP Belmarsh & ISIS. Monique explained what PACT does and the services it provides based on the scenario the VYG presented.

The second VYG scene showed the wife and son visiting their incarcerated husband, and father respectively and the conversation between the three. Topics included the struggles the son was gong through in trying to make money for the family using illegal means and the stigma attached to having a family member in prison.

After this scene, Ian Smith, Partnership Manager from JobCentre Plus explained the services and advice they offer for ex-offenders and their family members trying to find a job. 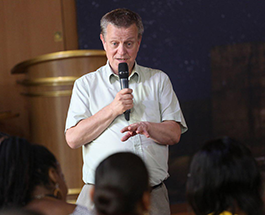 The final scene by the VYG showed both mother and son leaving the prison and being met outside by a member of the Rescue for Dignity Group, something that the volunteers actually do on a weekly basis to communicate to inmates’ families about the services they provide for both inmates and their relatives.

Sergeant Abs Haque, Police Sergeant at New Scotland Yard’s Strategic Crime Prevention, Inclusion and Engagement Programme quoted on his Twitter account saying, “…families, friends & amazing charities like those I met today are so vitally important to support each other during difficult times when you might face stigma, embarrassment, financial difficulties, isolation because of a loved ones actions, you are not alone!”

Following on from this, there were 2 testimonials by members of the ROD group who were inmates in prisons in the UK.

Sergiu Cosmin-Cramba and Cyrena Mullings from the ROD Groups in Finsbury Park and Brixton shared their experiences of their family life and upbringing which led them to commit crime and eventually being imprisoned. They also spoke about the help they received from ROD volunteers to now being active members themselves today supporting family members as well as inmates.

Chrissy B, host of the UK’s only TV show on mental health and wellbeing (The Chrissy B Show),  spoke about her battle with depression and panic attacks and how it affected her life and relationship and the mental prison she was in for over 7 years, something that inmates as well as their family members experience. She went on to say how she got help through ROD’s supporting church and charity, the UCKG HelpCentre and has been completely free from everything for over 22 years.

Head of UCKG Community Outreach, Pastor Michael Boodram, spoke about the great work ROD does with inmates and their family members and encouraged them to stay behind for extra advice and other support services available.

After a Q&A session where the audience was invited to ask speakers questions, the event came to a close with a chance for extra one-to-one advice and support at the speakers’ stands. There was also a chance for networking opportunities and refreshments for all.

The following are comments from the speakers and attendees on the overall day:

“It was a really good environment to bring both families and organisations together in order to support the families in rehabilitation. It was nice to hear the testimonies by those who have been affected by imprisonment. It was great to see the visual re-enactment of what it is like to be in prison; the thoughts, feelings, emotions, the fears everything that goes into imprisonment and why it is we do what we do. What I enjoyed was the fact that at the end families had the opportunity to ask questions to get more information and to feel more comfortable to express what they have been going and have a one-on-one with us and talk about things that were bothering them.

I would like to see more of this going on as much as possible because I think it really does allow the families and ex-inmates to get together. But also, to allow us as organisations to create a positive environment in trying to support those around us to come together and jointly to do something that we are all trying our best to resolve within our communities.” – Monique Joseph, Family Engagement Officer, PACT

“It was generally nice to have the Engagement Officer and PACT in to speak. It was very well presented and clear. The drama was also very well acted. It gets you thinking on what is happening out there and allows you to understand the impact on families.” – Jose Da Cruz, Edmonton

“Using the testimonies of ex-offenders is effective. Great information. Inmates can believe in themselves despite their past.” – Jessica Campos, Kilburn

“I felt the organisations involved provided such valid feedback and support, excellent gold nuggets were thrown in throughout the entire event. I felt the topics discussed were very broad and the diverse scenarios’ and testimonies covered pretty much everything.” – Anon

If you would like to know more about future Rescue of Dignity events taking place in the community, as well as its upcoming ‘Out for Success’ event taking place on Saturday 26th October 2019, you can contact us on groups@uckg.org or call 020 7686 6020