Lambeth Councillor Mohammed Sadeet and Nicola Ashitey, an officer in the Met’s Trident* unit were both speakers at About this Life, an awareness event organised by the Victory Youth Group (VYG) and held at the UCKG HelpCentre in Brixton on Sunday 2 April.

Targeting young people, their parents and family members, About this Life set out to explain the complexities and issues that young people face on the streets in respect of guns, knife crime and gangs to an audience of around 150.

The event started with a bang, with the VYG’s presenters questioning the audience about their knowledge of gun and knife crime, before moving on to spoken word performances and drama. A play, specially written for the event, followed the lives of two London suburban families whose lives were linked through drugs, gun and knife crime and in due course, tragic consequences. 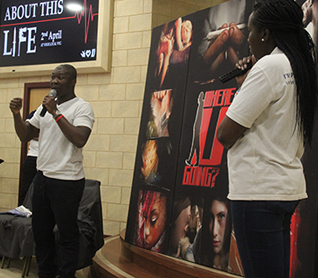 Transitioning from drama to real life, Councillor Mohammed Sadeet was introduced and spoke of his desire to tackle violent crime. Trident police officer Nicola Ashitey added to the deep insight by covering the allure and then the consequences of the gang lifestyle.

The event ended with the UCKG’s youth leader, Pastor Uweme, reminding the audience of the power each person has to change their world.

Similar events were held in the UCKG HelpCentres in Finsbury Park, Catford, Kilburn and Plaistow, and were also supported by Trident officers and local councillors, and in one instance by the Race Equality Foundation.

*Trident was formed to tackle black-on-black gun crime and has since been expanded to deal with knife and gang crime.

We use cookies on our website to give you the most relevant experience by remembering your preferences and repeat visits. By clicking “Accept All”, you consent to the use of ALL the cookies. However, you may visit "Cookie Settings" to provide a controlled consent.
Cookie SettingsAccept All
Manage consent

This website uses cookies to improve your experience while you navigate through the website. Out of these, the cookies that are categorized as necessary are stored on your browser as they are essential for the working of basic functionalities of the website. We also use third-party cookies that help us analyze and understand how you use this website. These cookies will be stored in your browser only with your consent. You also have the option to opt-out of these cookies. But opting out of some of these cookies may affect your browsing experience.
Necessary Always Enabled
Necessary cookies are absolutely essential for the website to function properly. These cookies ensure basic functionalities and security features of the website, anonymously.
Functional
Functional cookies help to perform certain functionalities like sharing the content of the website on social media platforms, collect feedbacks, and other third-party features.
Performance
Performance cookies are used to understand and analyze the key performance indexes of the website which helps in delivering a better user experience for the visitors.
Analytics
Analytical cookies are used to understand how visitors interact with the website. These cookies help provide information on metrics the number of visitors, bounce rate, traffic source, etc.
Advertisement
Advertisement cookies are used to provide visitors with relevant ads and marketing campaigns. These cookies track visitors across websites and collect information to provide customized ads.
Others
Other uncategorized cookies are those that are being analyzed and have not been classified into a category as yet.
SAVE & ACCEPT