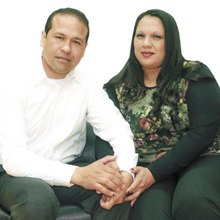 Ruben Ibáñez had a difficult childhood. His father had problems with alcohol, and he would constantly witness his father beating up his mother.

Years later, when Ruben was putting together his own family, he was already addicted to alcohol and had been beating up his girlfriend for a long time. The story of his past was repeating itself. His wife, Maria Claudia Reyes, shares:

“Whilst I was pregnant he used to hit me, and as time passed things only got worse. I suffered physical abuse from the hands of my husband…”

“…I remember that whenever he would drink he would get out of control at home. We would argue and out of nowhere he would hit me. When he wasn’t drunk, simply because he had a strong character, he would still hit me. The children were afraid of him, and whenever they would see their father drunk they would hide in the cupboard…

At times Ruben would lie and become very aggressive, but even though they used to fight, they couldn’t stand not seeing each other. Maria continues:

“Sometimes he would arrive home and even though he would think I was asleep, he would wake me up and start hitting me. Besides that, I would try to avoid making him angry so he wouldn’t hit me. One of the last fights brought an end to everything – there was no more love in the relationship, we slept in different rooms, and any word spoken was enough reason to start an argument.”

Ruben started to participate in the meetings at the UCKG – because he had a sickness in the stomach whose diagnosis the doctors couldn’t find. His co-worker invited him to the HelpCentre, and after one week, Maria shares that she saw changes in his character – he asked her for forgiveness and bought her flowers. However, in the beginning, despite his good efforts, when he would ask for forgiveness, he would do the same thing a week later. She had a hard time trusting him. Time passed and not only did that change, but she saw many more changes in him, so she also started attending the HelpCentre to fight for her own battles.

“He left everything – alcohol, drugs and violence, she concludes. Today we love each other and even work together, as we are financially independent. We don´t fight anymore, there are no arguments or beatings. The children are no longer afraid of their dad and now we enjoy the family we have.”