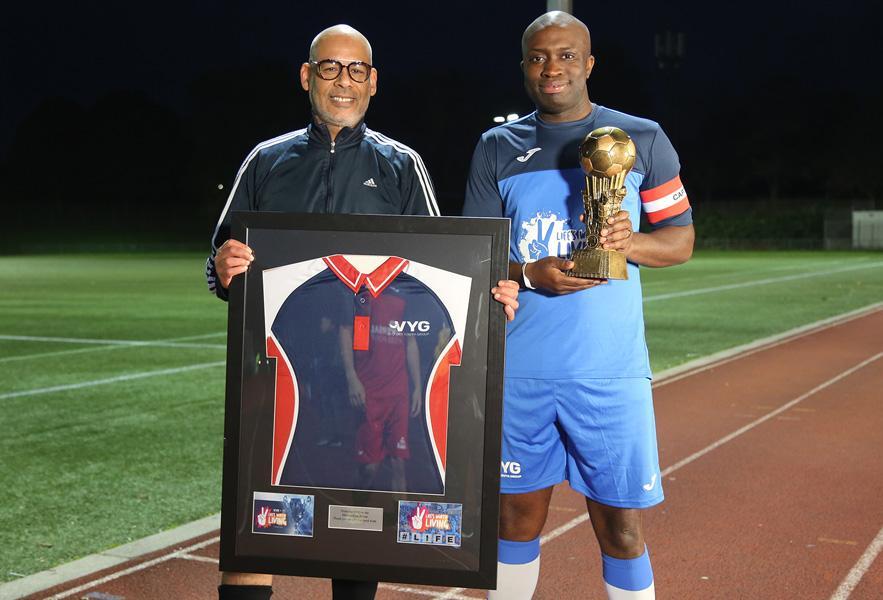 A close run football match on Sunday 7 November, saw a team of VYG youth pastors from the UCKG HelpCentre beat a team of Islington police officers 4:3. However, the charity contest at the New River Stadium* in Wood Green, was much more about building relationships than simply winning.

“We were keen to support the hard work that the Met does in our local area and develop relationships between the police and our youth group, the VYG,” said its leader, Ade Titilawo.  A football match was a great way to expose the Met to the VYG and our campaigning against knife and gun crime, under the Life’s Worth Living banner, and encourage future cooperation.”

On a brisk autumn afternoon over 1,000 spectators, comprised of VYG members and families watched as Pastors Michael Lewis, Nnamdi Okonne and Kai Lilly scored a goal each for the VYG. A single striker scored all three of the Met’s goals, however the decider that tipped the game in favour of the VYG was a Met police own goal.

Once play was over, Ade Titilawo, who had captained his side, presented a framed VYG polo shirt to the Met’s captain, PC Mamdouh Abdelkader, who had also had a major part in creating the event. He thanked the officers for their participation, and individual awards were presented to all the players.

PC Abdelkader, who is from an African background, and who joined the Met “to make a difference” added: “We guys are with you. Any help [needed] you can come to us, and we can come to you as well. It’s about time to come and make a difference in London because London is about diversity and in the Met we try to show this diversity.”

Speaking on behalf of the VYG dancers who provided half time entertainment, Mo’nique Craib from Hammersmith said:  “I was excited that the Met Police had the opportunity to see what the VYG is about. I believe they clearly saw that we are on their side, working together to make a better community filled with youths that have the correct mindset.”

UCKG is a Christian church and registered charity that offers a range of practical support activities alongside spiritual support and comfort and welcomes all- comers. It reached the UK in 1995 and has gone from strength to strength, providing support and spreading the Christian faith. There are UCKG HelpCentre branches in England, Wales, Northern Ireland and Scotland.