A vision that I didn’t give up on 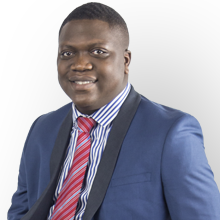 I lived a life that nobody dreams of living. I couldn’t pay my bills, eat well; I had to walk to most places and borrow from friends. My life was restricted to simply depending on others. My bills would often pile up and I’d have to sort out delayed payments. I turned to fraud and sometimes gambling to find a quick fix to pay my bills or even gamble, which didn’t help at all.

I found out about the UCKG HelpCentre through a friend who was so enthusiastic about the meetings, and often encouraged me to attend with him. I was able to find help there. I started attending the Independence Project meetings on Mondays early on, as it was an area I really needed help in. I was following the practical advice and learnt how to be wise with the little I had.

But learning about the power of faith is what truly changed how I saw my life. I discovered that challenging God and being faithful to Him puts me in a position to see what I’m asking to actually happen. I often saw results by doing this.

I was working for a healthcare system for the past three years, earning enough for me to live. However, it got to a point where I was learning more about the power of faith and how God’s vision is much greater than we can imagine. I really meditated on them and started looking for jobs that were better than what  was currently doing. I was totally depending on God. I found a role that I had been looking at for some time; however, they had rejected me several times before. But with this full belief in God, I still applied and received an invitation for a formal interview.

I was successful and out of 500, I was one of the three people to be offered a role. This role is to work in Westminster, for the Cabinet Office. This is a job that is completely out of my “comfort zone”. I was blessed with an opportunity to earn much more than I was earning previously and in a prestigious company.  “Out of 500 I was one of the 3 offered a role”

The role was offered to me, I was happy and did the security checks, paperwork etc. However, over a month passed and I still wasn’t given a confirmed start date. During this time, I was still attending the Independence Project meetings, as well as the special Business meetings. I realised that I couldn’t just sit around; I had to make things happen. I realised there was a delay there and I contacted the department. They told me I should have started by now if I had been offered the role over a month ago, and said they would get back to me.

I took this to God. The following week, to my surprise, I was told the reason they couldn’t find me is because I was placed in a different department, this time at the House of Commons. The salary is much higher and it offers better prospects in the future. Today, my financial life is progressing and I have seen a complete turnaround in my finances, but I believe that there is still room for more growth. That’s why I still attend the Independence Project meetings at the HelpCentre.