a respectable man, a serious relationship, attending the Universal Church, I decided to prioritise God, importance of forgiveness, 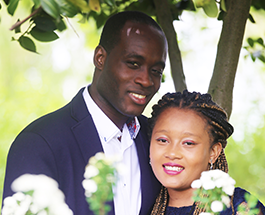 According to recent statistics from the ONS (Office for National Statistics), 42% of marriages in England and Wales end in divorce. Therefore, it is highly likely that you or someone you know may have gone through their parents separating at some point in their life.

Children of divorced parents can go on to suffer long-lasting negative effects during childhood, such as rebelling or failing academically. We tend to think that those kinds of wounds get healed with time; however, researcher and psychologist Judith Wallerstein states the highest impact of divorce on children comes 15–25 years after the divorce, especially when they get into a serious relationship.

Different studies suggest that people who have experienced the childhood trauma of parents divorcing, are less willing to marry due to fear their marriage will suffer the same fate.

So, do broken homes breed broken people? Not necessarily, as Richard Campbell’s story will show. Richard grew up in a broken home and often felt isolated and misunderstood. However, he decided not to become just another statistic.

‘It was hard to grow up in a broken home, I felt like no one understood me. In the past, the psychological and emotional effects a broken home had on a child were not as well documented as they are today. I just became another statistic. I felt resentment and what I thought was hate for my mother. I blamed her for not understanding what I was dealing with and because of this, I believe our relationship was gravely affected. We would argue constantly, and although I knew I loved her and she loved me, we never actually said it because whenever we spoke, it was basically to argue. We grew far apart during this time.

I was always angry, it seemed that anything or anyone irritated me. I would just snap at people. I suppose it’s because of the way I grew up. I had no one to show me an example of a good marriage or to be a respectable man so I used to swear a lot and I would jump from relationship to relationship.’

However, at that point Richard’s mother was attending the Universal Church and he started noticing some changes in her. ‘I noticed that my mum started avoiding the arguments we used to have – something she didn’t do before. Sometime after that, a special meeting similar to the “Not Me!” event was announced and my aunt encouraged my mum to invite me. Taking her change into account, I accepted her invitation.

I went to the event and I really liked it, so I decided to continue attending the church. The main thing I learnt there is the importance of forgiveness, so I decided to let go of my grudges because they were becoming detrimental, even to my health. The turning point for me was when I decided to prioritise God. Although I was actively trying to change my ways before coming to the church, it was God who gave me that final push to change. It wasn’t easy, I worked hard to rebuild the relationship with my mum by doing things together. Spending time with her was crucial for me to let go of the animosity from when I was younger.’ Negative feelings feed off negative feelings. Richard needed to break that circle of negativity in order to grow. ‘Another thing I needed to do was cut off the people in my life who were preventing me from letting go. Some people in my life had grudges but did not intend to let go of them.

At that moment, I wasn’t ready to commit or even thinking of committing to someone. My mindset wasn’t in having a relationship. However, the meetings at the church helped me deal with my deep-rooted issues and once I changed, I was ready for a relationship. Venetia, my wife, came at the right time.’ The couple met in 2012, got to know each other, and eventually married in 2017.

‘Our relationship works because we learnt about the importance of investing in our love life. We are committed to and understand each other. We strive to show each other we care rather than just say it.’

Today, Richard has overcome all his difficulties and lives a happy life, despite the odds being stacked against him. He is living proof that just because your parents are separated, that doesn’t mean that you can’t live happily ever after.’