A tainted love made true 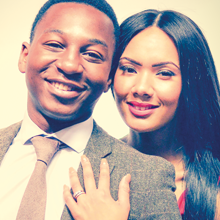 apiwa: Yasmin and I both lived in the same small town, where everyone knew everyone, but I had never seen Yasmin before. She intrigued me and we kept bumping into each other. We started off smiling from a distance, then saying hello, but I really wanted to speak to her. When I saw another guy trying to approach her, I realised that I needed to make the first move before it was too late. She was 16 and I was 17 at the time. We had similar ambitions and clicked instantly. After a few months of dating, we decided to make our relationship official.

Yasmin: In the beginning, Tapiwa was kind and charming. He came from a good background and always showed great respect and value to his family, and I believed towards me too. It was those great qualities that outshone his bad ones, like the fact that he had a lot of female friends and male friends who were bad influences. I was young and naive, and deep down knew that he was a player before, but I believed he had changed since he met me.

Tapiwa: I gradually became cold and unfaithful towards Yasmin, but my behaviour had a root. During my early years, a male family friend abused me. I didn’t understand it at the time and as I grew older, I suppressed it. But in the back of my mind, I knew it was the reason why I would hook up with so many girls just to forget the past and prove my masculinity.

So though I wanted to have the serious relationship that Yasmin wanted, I couldn’t help myself. My unfaithfulness was okay in my conscience, because I believed that God knew I had a good heart, despite all the bad things I did.

Yasmin: I idolised Tapiwa and put him before everything else, but he lied and wasn’t faithful to me. He would go out a lot, and didn’t pick up the phone when I called him.

I was always upfront about how I felt and what I believed was not acceptable, but he was very good at turning it on me and slowly made me feel like I was controlling and insecure. I lost trust because, although I believed some of his lies, I always knew in the back of my mind that he wasn’t telling me the truth.

Besides that, Tapiwa had some really great qualities that I admired and this made it harder for me to leave. I began to feel trapped with someone that I loved, but who wasn’t good for me.

Tapiwa:Yasmin idolising me in the way that she did made me hate myself. Having to live with the lies made me feel lost and alone. As time went by, this led to depression. I felt like there was no one I could talk to about what was going on. Yasmin was all I had, but even that wasn’t real because she didn’t know the whole truth.

When we discovered the UCKG HelpCentre, we were just ‘passers-by’ for two and a half years. We would go as and when we could and felt like it. But we were on the verge of separating and our financial condition was a mess. We had lived in six different places in the space of four years and I felt as if there was something blocking me from being financially successful. I wasn’t a tither because I blamed God for my failures. Then we had to make a decision to be faithful in our attendance.

Yasmin: An assistant invited us to the Love School. We had just moved out of London and our financial situation wasn’t great, so she insisted on paying for our tickets.

Tapiwa: We learnt about the seven sins that people commit in a relationship, like putting your career before your partner. For years, I had done that, working until the early hours of the morning. Whenever work came up, I jumped for it and put Yasmin at the back of the queue in my life. But the Love School was the kick-start of the change in our relationship.

Yasmin: During that time, I made a vow to God that I would put Him first, but I wanted to see a difference in my relationship. I wanted to know the truth, if I was going to continue with Tapiwa. And God honoured me!

On the day of our baptism, Tapiwa confessed everything about what he had been doing. From that day on, he was delivered! It was his deliverance that really showed me how great our God is and how I never wanted to put God last again.

Tapiwa: We started doing everything to invest in our relationship. We began to attend Love Talk Live meetings, which taught us how to communicate, respect each other and to make each other happy by putting each other’s needs before our own.

Yasmin: We were attending the Wednesday, Friday, Saturday and Sunday services and Tapiwa was going to the Monday meetings, which really changed our financial life. We also did a seven-week marriage course, and it was through all of these investments that we learnt to make God the foundation of our marriage.

Tapiwa: Now our relationship is strong. It has been a fight but we made it. We surrendered to God and put our lives and our relationship in His hands and He transformed everything. And most importantly, He gave us the greatest gift of all—His Holy Spirit—, when we took part in a Campaign for a total life transformation. We have changed individually and as a couple. I am faithful to Yasmin and we do everything together. There is now trust a commitment in our relationship.

We have been together for almost seven years. We have a beautiful home, I am working for an IT company in the city, and we are in the first month of marriage. Life couldn’t be sweeter.