Two minutes to a lifetime of love 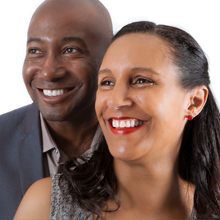 Had you known Diane and Peter Passelle before, you may have refused to believe that one day they would be where they are now. Peter was hiding behind a life that was anything but the truth, and Diane had to fight the greatest battle of all – overcoming herself. After that, there was only one thing left to do – find each other.

Diane: As a teen, I would rave, smoke and live life to the full – or so I thought. What I considered nothing out of the ordinary was in fact a means to camouflage the emptiness I felt inside.

Due to my wild lifestyle, I got into a string of abusive relationships, which all left their scars on me. I was broken. For many years, I could not come to terms with the hurt and pain I felt because of the wrong decisions I had made. I could always hear that voice saying, “No one is going to want you Diane.” Though I wanted to be happy in my love life, I found it impossible to move forward.

It was my sister who first invited me to the UCKG HelpCentre. I would attend the Friday meetings, and as I kept going, I knew that God was healing and forgiving me of my past. The problem was that, for a long time, I could not forgive myself and move on. It was a huge barrier that I struggled to break and it affected me for many years. I had no idea that I had allowed my past to dictate how I lived my life – as a woman afraid of moving forward.

Peter: I was living a life of lies to compensate for my inadequacies, and because of this, my self- confidence was really low. I only felt bold when I was drunk or taking drugs—mainly cocaine and ecstasy.

Living in a shared house with people much younger and successful than myself contributed to my insecurities. Because I doubted myself so much, I created a fake persona; someone I wished I could be. When I was asked my age, I lied. I lied about where I worked, what I did for a living, where I went on holiday. I lied about everything! Sometimes I got so confused that I wasn’t even sure if I was telling the truth or not.

When my mum died, I felt like the world owed me something and that things were going to change. People thought that just because I dressed well and looked confident, I lived the good life. But it couldn’t have been further from the truth. I was empty inside and the little lifestyle I had was mainly financed by credit cards and loans, until I had racked up a debt of £20,000.

There was a time that I went clubbing from 9pm on Saturday and only arrived home after 9pm on Sunday, sustained only by drugs. I wasn’t happy! I wanted to commit suicide!

My sister’s friend gave me a lecture about how bad my life was, and that only God could change it. I needed to fix it, but I guess that speech was my wake-up call. She invited me to the UCKG HelpCentre. I’d been there before and hadn’t taken it seriously, but this time it was different. When she’d spoken to me, it was more than just a speech. All she said had appealed to a deeper part of me, and right then I decided not to swear, lie, steal, take drugs or do anything else that I now believed was wrong.

I had started going to the meetings on Fridays at the HelpCentre so that I could back up the decision I had made to change. As I found myself able to stay away from the things I’d been addicted to before, my whole life started panning out through the Campaign of Israel. I learnt that I could achieve my goals and become somebody, so in my first Campaign, I sacrificed my salary. It was all I had but I decided to use my faith instead of keeping it for myself.

After making my sacrifice, I received a large sum of money that enabled me to pay off nearly all of my debts. By the time the following Campaign came around, I was successful in buying a flat, even though my salary stated otherwise. Then I got a better job where I was earning twice the amount of my previous income.

And that has been the basis of everything I have conquered. Because I have seen that my sacrifices were always answered, I never stopped, not even for my love life.

Diane: I decided to work on my love life and was advised to start attending the Love Therapy sessions on Saturdays. I didn’t want the same relationships as the ones I’d had in the past. The meetings helped me to understand the truth—I was allowing my past to dictate my future. Through the prayers and advice, I found the strength to move on and started praying for a suitable partner.

Not long after that, I began to notice someone who was also going to the Love Therapy. I liked what I saw but I didn’t want to rush into anything, so I observed him from afar. For a year I watched him without saying a word to anyone about how I felt.

I had previously seen results in the Campaigns of Israel, so when it was announced again, I grabbed the opportunity to challenge God. I sold my mother’s wedding ring, a valuable possession, my electrical equipment, including a brand-new phone and TV, because I wanted to have a love life of my own and I wanted to call God’s attention. I know that sacrifice works. I continued to build my financial sacrifice. From then on, I started imagining what it would be like to have the love life that I wanted: one filled with happiness, love and faithfulness. I knew that my faith would get me where I wanted to be and I could just see my future partner and I building and planning our lives together.

I continued to faithfully attend the Love Therapy meetings, and soon an opportunity arose to speak to my likely suitor at a speed-dating event. I only had two minutes to talk to him and all I could think was, “I have to wait behind seven people before I will finally get to speak to him.”But my turn eventually came and we completely hit it off. I didn’t want the two minutes to end, but when it did he asked if he could speak to me after the event. I was so happy and I agreed.

Peter and I carried on talking for a few months before we started dating. The experience was wonderful. He was the example of a real man, not to mention a man of God. He was everything I had been looking for and the day that he asked me to be his wife was one of the happiest moments of my life. Marrying him and becoming Mrs Passelle was even better.

My husband is everything I hoped for and everything I have ever wanted. He is loving and treats me like a rose. We are incredibly happy together and none of my past relationships can compare to what we have now.

Peter: Diane and I own a flat and we go on holiday whenever we want to. My salary today is three times more than what it was when I first arrived at the HelpCentre. One of my biggest dreams was to drive my own car and now I have that car. But this is just the beginning, because we will carry on sacrificing for extraordinary things.