The not-so-glamorous life of a former glamour model 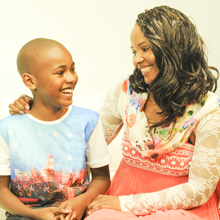 The death of my father when I was growing up meant that I became a nomad, being passed from one person to another because my mother didn’t have the means to look after me.

I have memories of living in a good house, but the outside meant nothing. What happened on the inside was hell. My abusive and aggressive uncle would touch me in inappropriate places. I hated it and I hated him. I was young and helpless and could do nothing about it.

During the holidays, I would visit my grandmother, where another uncle would do the same things to me. He would call me into his room from time to time and would be completely naked. I understood that what was happening was wrong, but I didn’t know what to do.

I would go into my room and cry myself to sleep, alone with my thoughts, wondering what I had done to deserve such a life.

When I was 15-years-old, I finally had a shot at making my life better. I left Zambia alone and journeyed to the UK with one promise in my heart—that I would have a better education. I stayed with family friends.

In the beginning, everything was working out well…until the verbal abuse started.The man was very aggressive and called me names. I was treated unfairly and even accused of poisoning their food. It became unbearable to live with them.

Although I went to college, I wasn’t getting the education I had been promised. It was unfair. I didn’t want to go through what I had experienced back home again, so I decided that the only option I had was to run away.

I knew someone who lived in London who offered to help me. At the age of 16, she introduced me to glamour modelling as a way for me to make money quickly. She helped me to get an NI number and dealt with my immigration issue, but would ask for large sums of money to pay the lawyers, which I found very suspicious. Yet, I had no one else to help me so I relied on her.

One of the lawyers she suggested took me away to supposedly help me sort through some papers. When we got there, I found it strange that we had to share a room, and it was even more shocking when he lay down right next to me and sexually abused me!

I was utterly confused and completely hopeless. All my life, I had been treated like waste and now it had happened again. I didn’t know who to turn to anymore. I felt like I couldn’t go to the police because I was scared of being deported, so I returned to London.

I was moved into the care of social services, although the woman that had been “helping” me kept in contact. I managed to find work in a coffee shop and was introduced to someone through a colleague, whom I got into a relationship with.

It wasn’t anything serious at all; it was only a short-term relationship. But in that short space of time, I fell pregnant with his child. When my son was born, the social services and a cousin supported me, but life was still incredibly difficult.

One day, I received a phone call from my friend, offering me the chance to work as a table dancer in a club. This friend had done nothing profitable for me since I had known her.

By this time, I had been attending the UCKG HelpCentre for a few weeks. As I was about to call the club, I was contacted by one of the spiritual advisers and I was determined to never allow the past to dictate my future.

I decided to start attending the HelpCentre faithfully. I participated in the meetings on Sundays and Wednesdays and a newfound hope was formed in me. As I began to know God more, I gained confidence in myself and He gave me the courage to do things I never imagined I would.

The process of change was a long one—cleansing myself from the grudges and the memories of my past were a fight between my emotions and my reason. I had suffered all my life and it wasn’t easy to forget what had been done to me.

But that’s where the Holy Spirit came in. As I heard more and more about Him in the meetings, I wanted to know Him. But I understood that I couldn’t have Him living within me without getting rid of the “old me” first.

With the advice and motivation of the advisers, I slowly shed the skin of my unclean nature. I still remember the day that I surrendered my heart, mind and soul entirely to God. That day was the happiest moment of my life—I received the Holy Spirit inside of me.

Everything was different now. With a fresh mind, I returned to education and successfully graduated in business.

My entire life has turned around. I am not depressed, nor do I hate the people that hurt me in the past. I’m so grateful for all the help that I received. I learnt to care for my child and to build a strong bond with him.

With the Holy Spirit, I look forward to every day. Whereas every moment was miserable for me, no matter what comes now, I know that tomorrow will be a brighter day.