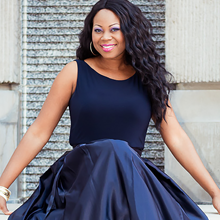 In my home country, I worked with my family business in the property management field before working as a project manager and trainer for an international telemarketing company, as well as an events planner for the company.

I was earning a fairly decent income and I travelled to other Caribbean islands. My relationship with my family was great, but I still felt like something was missing. So when I received the news about the working holidaymaker travel visa opportunity to come to London, I had nothing to lose! I envisioned much more and sold all my valuable belongings to pursue the dream of a media career.

Straight away I landed a property administrator role; it was not my dream job but I was grateful that I was able to earn, save and send money back home. Never had I worked so hard and endured such long working hours. I quickly lost weight; I became withdrawn and was very lonely inside. I was missing home and my family terribly. The whole experience knocked back my confidence and my happy, sunny personality slowly disappeared.

However, as my weight dropped, I was approached by numerous modelling agencies and pageants. I started modelling, mainly for the British, Caribbean and African community. I was doing fashion shows, magazine shoots, guest appearances, travelling and so on. This part-time career opened other doors for me; as my journalistic side was emerging so was my confidence.

But there came a point when things started going downhill. My passport was lost during the time that I’d sent it off to renew my visa. I had no choice but to inform my employers, and decided to return to my home country, forcing me to leave my life behind in London. I was devastated. The process of renewal took a year, and when I returned to London, I had to start all over again. The jobs I once had weren’t waiting for me.

I was unemployed and had no money to pay the bills; I’d used all of my savings whilst in the process of searching for a job. I had no friends or family to help me. I found myself crying every day trying to figure out how it had all gone wrong. I questioned whether I should return home, until the day I took a walk and noticed a sign that called to anyone who needed help. It was the UCKG HelpCentre.

I first saw the bookshop, so I looked for a CD or a book. But I was approached by a helper and invited to attend the Spiritual Cleansing meeting. It was different to anything I had ever experienced. They made prayers for deliverance and I left the meeting at peace, a sensation I hadn’t felt in a while. I knew that everything was going to work out for the best.

That day, I got home and had received job offers from five different companies offering me a position to work as an administrator/sales and letting adviser and customer service representative. I was crying my eyes out.

Even though these offers were great, I didn’t accept any of the jobs. I had made a decision to renew my relationship with God, and these jobs required me to work on Sunday. I made chain of prayers on Mondays, Wednesdays, Fridays and Sundays. The HelpCentre was 20 minutes away from my home so I was there often, receiving advice and support.

Three weeks later, after the Independence Project meeting on Monday, I received a call from a television company requesting that I host a new television show. I had never hosted a TV show before in my life, but I was able to negotiate my own fees and working hours so it didn’t compromise my faith.

I took part in the Campaign of Israel—a spiritual purpose that happens twice a year at the HelpCentre; however, my request was not for material things, but for the gift of a secure spiritual life. The Wednesday and Sunday meetings were my priority. I sought the Holy Spirit wholeheartedly, and the day that I received Him was the greatest day of my life. The Alafair that I used to be returned a thousand times better, with true peace and joy to show for it.

And the blessing came in many areas. I had gained experience in presenting my TV show and live events, but I wanted to make a difference on mainstream television and be more creatively involved in TV production.

After the campaign, I put pen to paper and came up with some ideas for a television series. Later that week, I received a call from a mainstream television company that wanted me to present my TV programme not just in London, but in my home country, in other Caribbean Islands and parts of Africa!

I have everything my heart could possibly desire and I owe it all to my faithfulness to God. He truly knew my heart. I just had to ask.