From being POOR to being a MILLIONAIRE

an innovative idea, I attended the Universal Church, my life started to change, read the Bible, the worst of times, This was hard to hear, 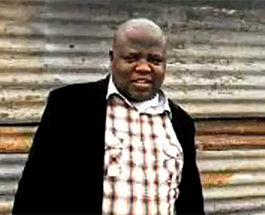 Chippa lived in a shack in Nyanga, a township in Cape Town, South Africa. He was barely able to provide for his family and at the worst of times, he had to beg for food just to have something to put on the table.

‘I felt like I was stuck in life. I attended the Universal Church, but I felt no sense of purpose. People would avoid me because the night before, I had been to their house begging for food; they knew what my life was like.

I was just a security guard, earning the equivalent of £300 a month; I used to look after houses and also cars in car parks; some people did tip very well, but it was not enough to take my family forward. Our shack had no furniture and nothing of value; we literally had to fight for food. Our situation was dire.

I was a despised person; in my house, I was a man with no dignity and my wife had no confidence in me. I was not a man who provided. When my wife and I got married, we had a very humble wedding; we couldn’t afford anything else, and her family couldn’t even come. Of course, a honeymoon was out of the question. Her family said that our marriage would be cursed, which revolted me. How could I pray to God, how can I come to this church, how could I read the Bible when my life was the opposite?’

Feeling as though he’d reached his limit, and having participated in purposes of faith in the past but with no results, he decided that this time was going to be different. ‘This time around, I said to God that it would be a now or never moment for me.’

‘I had had enough humiliation. If you are God, I have to follow You, otherwise what is the point of coming here. I took the decision to start praying more; my neighbours used to ridicule me on the streets and say things like they had heard me pray the night before, or, when I worked night shifts, they used to say they knew because they heard no one pray from my house that night.

I used to invite these people to the church, but they would laugh, and they used to reject my invitation because they said that looking at my life made them doubt that God even existed. This was hard to hear.’

Chippa had been attending the church for about four years but, at that point, he decided to take up a Challenge of Faith. He had all to win and nothing to lose.

“Through the Challenge of Faith, my life started to change”

Through the Challenge of Faith, Chippa felt different instantly. ‘I didn’t get a college education; what I was looking for was a better job. So, I signed up and took a short security course and found a job as a security guard shortly after.’

‘I didn’t know what the outcome would be, but, miraculously, the business flourished. All of a sudden, my life started to change; I was able to rent a flat, and I could properly provide for my family. I was a dignified businessman; people saw a miracle in my life – something that had never been seen.’

Although Chippa was finally prosperous and life seemed to be smiling down on him, there was something within him that told him that this wasn’t the end of his journey, which is why he decided to take up another Challenge of Faith.

‘People thought I was crazy; they said that I already had what a lot of people hope for. But I knew that only being a security company owner wasn’t for me. So, I started from scratch again.

I felt that life was nothing. I was a business owner, but there was not much difference between me and my employees; my business was average.’

Ultimately, Chippa’s big break came with an innovative idea. He approached Pick n Pay, the second largest supermarket chain store in South Africa, and proposed an idea: that they hire him to collect their shopping trolleys that people were using as modes of transport and then sell them to the scrapyard for money.

At first, Pick n Pay wasn’t interested, because they didn’t think they were making enough money to hire someone to retrieve them. However, Chippa persevered, and the supermarket chain caved in and hired him.

It seems that Chippa was definitely onto something, as, in the first month, he and an employee (he hired someone to help him) picked up around 800 trolleys; Pick n Pay then offered him a contract of R40,000 (£2,200) a month.

This was the start of Chippa’s rags-to- riches transformation; from then on, he built everything that he has now. Today, he is a successful property developer; he has many assets, including homes, cars, and commercial buildings, as well as owning South African club Chippa United. Chippa and his family now live in Van Riebeeckshoff, a suburb in Bellville just north of Cape Town.

‘We haven’t stopped in 15 years; I haven’t dropped the ball. I’ve seen people come and go. But for me, even when things weren’t going my way, I never gave up, and now I have more than anything I could have ever imagined.’