A sinister tale of the “baby blues” 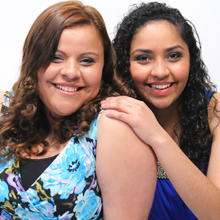 I remember my childhood clearly, when I lived back home in Brazil. I can recall the beatings, the abuse, the abandonment and the unhappiness. My mother beat me for any and every reason until my body was covered in bruises. One day she did it with a football boot; I thought I was going to die. What hurt the most was the hatred I saw in her eyes. I couldn’t understand why she despised me so much.

I was still a little girl when my uncle, who was 15 at the time, sexually abused me. I lost my precious innocence, and my eyes were opened to pornography. I was nine when the addiction started, but up until today, I still don’t know how I got access to it. I just remember looking at magazines and fantasising about the scenes I’d watch. When I was 10, I had the desire to experience what it was like to be with a man, and I would secretly meet them. They were usually older than me and they were the ones to initiate conversation and flirt with me.

I ran away from home when I was just 14 to be with my boyfriend at the time. Our four-year relationship was a period of time that I describe only as ‘hell.’ He left me with nothing but debts when he found out I was pregnant. Refusing to go back home, I stayed alone and struggled desperately with thoughts of killing my baby girl.

As I slept at night, I felt my body being touched and engaging in intercourse, although I couldn’t control it. I could see “him” – a black figure with wings,

horns and huge nails that dug into my head. It was truly frightening. I would wake up feeling so much anger that the thoughts of killing my daughter and taking my own life would immediately follow. I didn’t tell a soul, because I feared people thinking I was crazy.

Eventually, I met the man who today is my husband, but it wasn’t long after, that the arguments started. The attacks at night and the anger at my daughter, led my husband and me to search for help amongst those involved in black magic. But nothing was resolved, and things only got worse.

When a friend of mine invited me to the UCKG HelpCentre, I refused, so my husband went in my place. I didn’t expect him to come back and then try to invite me too!

He could forget it! I had my misconceptions and would never set foot in that place!

Yet I found myself exactly where I didn’t want to be. My heart beat vigorously and I shook as I walked through the door; I was afraid. There was something in me that didn’t want me to take the right step towards getting help for what I was going through. It was a Wednesday meeting, and I just wanted to see if the God they were talking about could really help me.

I had the chance to speak to a spiritual adviser, and by the time our conversation was over, the difference I felt was unmistakable. I felt peace for the first time in such a long while, and I decided that things weren’t going to be the same again.

I kept going back with my family. I was finding it easier to bear. My understanding of faith was developing and I was starting to believe in this God. I had become angry at all that was wrong with me, so by the time the Campaign of Israel came around, I was so revolted that there was no room for doubt; I was going to sacrifice. I needed to change. I made my vow with God. He either had to change my personality or kill me because I couldn’t accept who I was anymore. It wasn’t normal.

Despite how difficult it was, I never wanted to give up. I couldn’t afford to. As soon as I decided to make my vow, I was so sure that God would prove to me that He could change my life. I am astonished with the changes that started happening in me. As I started frequenting the HelpCentre, the thoughts of killing my daughter and the sexual attacks at night gradually disappeared.

Hope, joy and tranquillity have taken the place of the anger and torment that was inside me. It’s as if God washed me clean. I am now a loving mother and a dedicated wife, who is happily married. I can only thank God for erasing all the pain and hurt from the past, and for giving me the chance to be a new woman and a better mother to my children.