A hopeless dream turns to reality

change my life, God, I had doubts, I was innocent, my financial life, pocket money, promise I made to God, South London, UCKG, 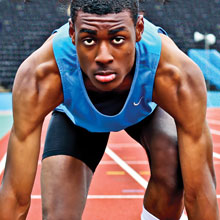 I could have called my grandmother, “mum”. She was more deserving of the title. A bitter and hostile environment was not the right setting for a two- month-old child to grow up in, and so, I was taken to live with her.

My parents failed to get along and I had no opportunity to speak to or even see my dad whilst I was growing up. But my grandmother made up for it by treating me like her son. She sent me to the best private schools, fed me and gave me pocket money, as well as fulfilling other motherly duties.

All was going well, until I had to move back to the UK to stay with my mum. The stress of her relationship with my cheating stepdad caused her to break down mentally. This had an effect on me and I turned out to be a very angry child.

I was a nightmare to live with. I was getting into fights with my younger brother and sister and I couldn’t get along with my mum simply because she wasn’t as well off as my grandmother.

We lived in a two-bedroomed house, so I had to share a room with my siblings – that was frustrating. There were times when we had no money to go to school and we had to eat expired food because we couldn’t afford fresh food. I felt forced to find a way to make money and quickly, and at the time it seemed like shoplifting was the only option. Whenever I had the chance, I would steal clothes, food, toys—anything I could get my hands on.

My stepfather wasn’t living with us, but he would come to the house and sleep over a few nights at a time. It was weird because he wasn’t helping to look after us. We
were struggling and starving and yet he had free access. I hated him. He still treated my mother terribly, and I let out all of my pent up anger at school.

On the first day, I got into my first fight. It was only downhill from there. As I began to mix with the wrong crowd, it was inevitable that I would end up in a group of young boys who, like myself, were full of anger and bitterness at the world. They smoked, drank and fought all the time, even going as far as getting into fights with guys from other areas. They were my friends and I felt pressured to be just like them. I wanted to fit in so I behaved just as they did. But being in a gang brought no comfort. There were certain places I could not go because I feared for my life.

Life at home was no better. I hated my stepfather so much that I went as far as to rob him. I was 17 at the time and it didn’t end well. I eventually had to leave home and stay in a hostel, which was also due to the fact that my mother’s mental illness only worsened with time.

Living alone was tough; I didn’t have money to buy food to eat, and I struggled to look after myself. It was as if I hadn’t left home. Nothing was different. I got to a point where I desperately searched for ways to make money. The thought of selling drugs crossed my mind more than once, but I knew that going down that road was out of the question. I felt lonely and depressed because the idea that my family had disowned me troubled me.

I was unhappy with my life. My grandmother took this opportunity to invite me to the UCKG HelpCentre. I went along with her and on my first visit I spoke to a helper who gave me words of guidance. I started going to the Sunday and Wednesday sessions, but to be honest, I didn’t value what I was given. And for five years I attended the meetings and heard the words of the spiritual adviser, but put nothing into practice. I still stole and got into fights.

But there is always a turning point and that moment came the day that I was falsely accused of murder. I was walking alone down a road in South London when I saw a crowd of police officers around. I asked a passer-by what had happened and they told me that someone had just been shot. Back then I had no respect for the police, as I was often stopped and searched. It seemed as if they were always watching me.

So to avoid them, I tried to find a shortcut. As I was walking, I suddenly turned around to find that two police cars were following me. The cars stopped and one of the officers got out with his gun aimed right at me! It was so surreal. He told me not to move and then searched me right there in the middle of the street and fired questions at me relating to the incident. By this time, I had guessed that I was being treated as a suspect. I was only confused as to the reason why. From the information I gave to them, they realised that I had nothing to do with the crime and it was just a case of mistaken identity.

Although I knew I was innocent, the experience of having a gun pointed in my face and being treated like a criminal was daunting.

After that day, I made a silent prayer to God, asking Him to change my life – if I changed and obeyed Him. I know how powerful one decision is. That very day, I stepped away from the gang of friends I was used to being around, and developed a different attitude when going to the meetings at the HelpCentre. I went in with an open mind and came out with a renewed heart.

Although I had doubts and moments of hesitation, I knew that once I’d decided to take the envelope, my vow had to be fulfilled. I wanted to test God. I sold my best clothes and my savings, and dedicated myself to proving that the promise I made to God was real. I spent time helping out in the HelpCentre and would wake up late into the night to pray.

I will never forget Christmas Day, because I know that it was the day the transformation happened. It was as if every thing that had ever been bad about me just left, and was replaced by a peace and a joy I had never known before. It was a unique experience. I left the HelpCentre that day the happiest I’d ever been.

Ever since then, my life has advanced. My interest in athletics kicked off from a few events that I used to take part in in college. Then a friend invited me to train at his club where I was noticed by one of the coaches. I specialise in long jump and train every single day. I have competed and won numerous county, national and international medals. I have travelled to Italy, Portugal and Switzerland and to various places in the UK. I have big dreams and am aiming for the Rio 2016 Olympics.

This year I graduated from university with a BA Honours in Sports Science and took part in another Campaign for my financial life. I wanted a job that fit into my lifestyle. It had to be something I had studied for and enabled me to continue training without interruption. As a result, I found a job working in a gym in the City training lawyers, insurance brokers, and businessmen.

My family has changed and is much better than before. By graduating and changing from the child she used to know, I have made my mum proud.

I have so much to look forward to in life. Thank God I was able to dig up the roots before they ruined any hope of a future.