spreading the Christian faith, trying to fit in, turned her life around, wrong life style,

It was certainly a good choice when the Catford and Peckham branches of the Victory Youth Group (VYG) decided to pool their resources to create a gun and knife crime awareness event at the Catford UCKG HelpCentre on 2 April. Close on 300 14 – 25 year olds, from all over south London attended, some accompanied by their parents.

The main attraction was a drama called About this Life, which was set in a typical London living room. It told how one wrong life style affected two families and led to self-destruction. None of the characters could see their way out of seriously troubled lives in which abuse, promiscuity and gangs played key parts.

Kim Powell, the UCKG HelpCentre’s Community Outreach Manager stated that one aim of the event was to show what young people are experiencing and how to get help and advice when they are in trouble. Today’s parents are bringing up children in an environment they don’t understand with technology and problems that they also don’t understand.

She was followed by speakers from Lewisham Council and the Race Equality Foundation. Councillor Damien Egan stressed the importance of maintaining a dialogue with young people and told of the council’s desire to tackle youth violence. Bernadette Rhoden from the Race Equality Foundation was next. She explained that young people are more likely to get involved with gangs aged 12 to 14. When she asked the audience how this happens the young people shouted out “peer pressure, trying to fit in”.

In thanking the organisers for inviting them along, Cllr Alan Hall reiterated that the council is keen to make progress on this topic and introduced Cllr Peter Bernard and Cllr Olurotimi Ogunbadewa. Guests also included PC Tomasz Gamracy and PC Claren Forster of the Met’s Rushey Green neighborhood community police and Kaya Begam of the Race Equality Foundation. 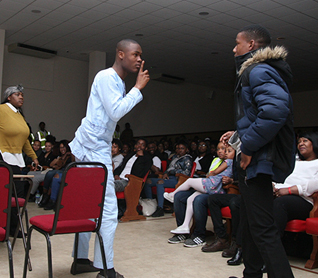 After the event Cllr Damien Egan stated: “One word ‘outstanding’. My first thought when invited was that I’d probably turn up to 30 youths, but to my surprise the turnout was amazing. To see youths so involved in such positivity is so inspiring. The VYG is the future and others need to see the importance of this!”

Cllr John Ogunbadewa added: “I have, but have, to make sure a new link is created between the council and the UCKG. Today I witnessed such great work the HelpCentre does for the youths, it’s amazing to see. The performances were also very entertaining.”

Similar events were held in the UCKG HelpCentres in Finsbury Park, Brixton, Kilburn and Plaistow, and were supported by Trident officers and local councillors.