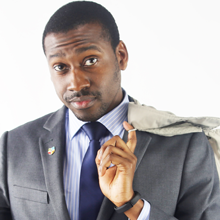 I suffered from spiritual attacks where, during the night, I would feel my body being touched and I would see my bed covers move away from my body. But the problems didn’t stop here; I would also hear voices – even though I didn’t take drugs.

“My family’s bond was also broken – as nobody got along. We would always argue. I had a terrible relationship with both my parents. I was addicted to pornography and the behaviours that were associated with it. I was also addicted to music, which I believed had an influence on my day-to-day actions. Due to being gang associated, I would try to make money by stealing phones from people.

“I believed in God at this time and, that being the case, I would pray about my problems and sometimes the problems would temporarily disappear. For example, when I prayed before going to bed one time, I didn’t have a nightmare.

“So prayer was one method I used to tackle my spiritual attacks. But most of the time, when I felt lonely or depressed, I would turn to pornography. I saw it as a way to escape from my problems.

“Moreover, one of my lowest moments was when I was arrested at the age of 16. My friends and I had gone around on a ‘robbing spree’. This was during the period when I was still doing my GCSEs.

“We would describe ourselves as ‘hungry’ because we didn’t have a good phone, any money or multiple oyster cards – which was a fashion at that time. We chose specific areas to conduct our thefts.

“We stole money and phones from people as young as 12. At one particular incident, we even stole from a boy and ran away to a bus stop, where we waited for a bus. Just before we could board the bus we were stopped by undercover police, searched and taken into custody.

“The next morning, my mother asked me where I had been. When I told her I had been arrested she got so upset. I tried to ask her a question and, before I could finish, she cut me off and said, ‘I never want to hear you call me mum again!’ This was another low moment in my life.

“At that point, I realised that my actions had affected my family life. I knew that a person’s home should be filled with happiness but this wasn’t the case for me. So from then, I understood that something had to change.

“It was my mother who initially invited me to the UCKG HelpCentre. She had been a member of the church for a number of years. She didn’t invite me earlier because, at that time, I was living with my father who was non-religious.

“After attending the church for a number of years, I started to take things seriously. In me was the desire to change my life, and the more I attending the more this desire grew. I started taking steps and certain actions to achieve this change, based on what I had been learning in the church. Then it was in one youth night vigil I attended, that I completed my surrender to God. This was all a result of understanding that I had nothing to loose; my life was completely ruined and I couldn’t keep up with my previous way of living.

“I had taken part in numerous purposes, and made many sacrificial offerings and, as a result of them, I started to see a number of changes in my life. But one of the biggest problems I was having was in my financial life, but despite this I continued making certain sacrifices to change my life.

From the age of 18, since I surrendered my life to God, every job I have acquired has been an improvement from the previous, both financially and in terms of the enjoyment. Before my current position, I worked at football stadiums, as a journalist, a diamond broker, and an apprentice at City Hall.