I fought for my immigration status, so my family could be together!

a better life, I took back my freedom, I used my faith, 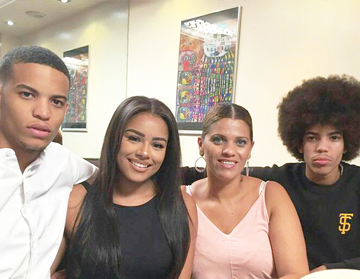 “I was in a totally different country, unemployed, without documents, and sharing a house with more than ten people.”

“My children and I left Portugal expecting to have a better life in London. Before leaving, I applied for my Portuguese nationality, because I am Angolan.

I sent the documents, and after being in London for a while, my children received their permanent residence because they are Portuguese, but mine was denied. I had to wait for about a year until my case was reviewed – my hands were tied. My greatest fear was being separated from my children. I was in a totally different country, unemployed, without documents, and sharing a house with more than ten people. It seemed like an endless struggle, but that’s when I found the UCKG.

I started attending the meetings at the UCKG and shortly afterward, I got two jobs. However, my visa in Portugal was near expiry and my immigration was undecided. I knew that if I used my faith, I would surely have my answer. I refused to keep my arms crossed and started attending the UCKG more often. I learned how to act my faith, but the battle was great. People that told me I could count on them if I needed help, turned their backs on me. To make matters worse, I fell on the bus. I had to walk on crutches and I could not attend the UCKG as often as I wanted to, but I still persisted in my faith.

A purpose of faith was announced and I participated with the conviction that my obstacles would be removed. Afterwards, I received a letter saying that I would have to go to Portugal to resolve the issue of my residence. When I arrived at the airport, a great revolt took over me. I did not accept for my sons to stay here.

Surprisingly, I was informed during the check-in that I could not board because my immigration status was still pending in the country. When I got home, my Portuguese passport had arrived, as well as my five-year residence visa in the UK! God didn’t allow me to be separated from my children. I took back my freedom!”