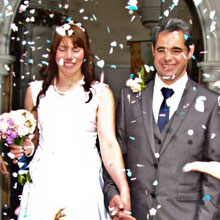 I was shocked, not to mention hurt and angry. How could he? The surprise of that slap to my face made me question the very day I had said “I do.” Where had our marriage gone wrong? It was the first time my husband laid his hands on me, but it wouldn’t be the last.

Sonia: That happened during the first month of our marriage. We were supposed to have been enjoying our lives as happy and blissful newlyweds, oblivious to the world around us. But that slap showed me who my husband really was. He hadn’t shown any signs of violence or aggression when we were dating, but he had turned into this drunken man that I didn’t want anything to do with anymore.

Ismael: I was very unpleasant when I was drunk. I drank a lot and came home in a state. My friends told me lies about my wife, which instead of ignoring, I listened to. And I would take my anger out on her when I got home.

Sonia: It didn’t matter that we talked things through and made up, because history only repeated itself. Time and time again, I would fear living in the same house as my husband.

The day that he threatened to kill me was the last straw. I had to get out. It was the end of one chapter, but would also be the start of a new one. I filed for divorce and moved from Madeira, Portugal to the UK with my two daughters. I wanted another chance at life, one where I could provide much more for my children and leave behind the memories of the past.

Ismael: I had made a huge mistake. I loved my family, but now I’d lost them. I was broken. And the truth was that I couldn’t blame anyone else, but myself. I knew that the way I had treated my wife was wrong, but when I was drunk, I lost all inhibition and self-control. I regretted everything.

Sonia: How did I come to the church?

I first started coming to the meetings on Sundays and I always left the building filled with so much peace.

When the Campaign was announced in the HelpCentre, I didn’t know what to think. Doubts and fears about whether it would work plagued my mind. It was the first time I would do anything like it. And when I finally made the decision to sacrifice, the surge of negative thoughts almost succeeded in stopping me from fulfilling my vow. I chose to listen to God’s voice.

My sacrifice was for my love life. I wanted to be happy. I did not even consider having my ex-husband back. I even told my eldest daughter, Juliana, that if her father ever came to the UK, I would move back to Madeira. All of my savings and my salary went into the financial part of my sacrifice.

Little did I know that Juliana was doing her own Campaign; her request was that our family would come back together. I took part in a second Campaign for my love life again, but this time I asked God to change me. I wanted a partner without being ready to handle a relationship, so I was going to the Sunday, Monday, Wednesday and Friday meetings. I wanted God’s will to be done, and not my own.

The Love School event came around and the buzz about it was exciting. Never before had there been a school on love at the SSE Arena (formerly known as the Wembley Arena), and I was eager to learn all I could to be happy in my love life. Once again, Juliana was working behind the scenes to bring my ex-husband and I back together again. I didn’t know that she had bought him a ticket so that he could come with us.”

Ismael: “I moved to the UK five years after Sonia and my daughters had moved there. I was surprised that Juliana contacted me to invite me to the Love School. I was living near the SSE Arena, so it wasn’t any trouble for me to get there, but I only went to make my daughter happy. I didn’t think that it would be anything special, but I was also curious to know what could be possibly taught on love.”

Sonia: “When I found out about that my ex would be attending the Love School event, I was angry. How awkward would it have been, being in the same room as my ex-husband; the violent man I had fled from five years ago. I was dating someone else at that time, and had invited him countless times to the event, but I was only disappointed when he could not attend.”

Ismael: “I had only gone to please my daughter, but I left the SSE Arena with the key to a fulfilled future. My marriage hadn’t worked before because I had the order all wrong; I only put myself first. I learnt that I needed to put my partner before myself. I also received a free copy of ‘Bulletproof Marriage’, written by the hosts. That book really helped to change my whole perspective of love.

I decided to start attending the HelpCentre, where my character completely changed. I no longer thought or treated people in the same way. I was filled with so much joy and peace, and I was very happy with the new ‘me.’”

Sonia: “As I had asked God to change me, that is when I began to notice a difference in my ex-husband. At first, my daughter was inviting him to the meetings every Sunday and he would attend. I had previously thrown the possibility of getting back together with Ismael out of the window, but it was after the Campaign that God showed me he was the one. That was hard for me to come to terms with, but I had to be obedient to God’s voice. The change in Ismael was becoming more and more evident. I decided to invite him to the HelpCentre myself for the following Sunday, and when I picked him up I knew that he wasn’t the same man he had been a few years ago.”

Ismael: “Eventually, Sonia and I started talking again. I saw that she too had changed a lot; she was no longer the same woman she had been when we were married.

She had previously been addicted to smoking, and that was something that I really didn’t like about her, but how could I judge her when I had been an alcoholic? We had hated each other’s addictions, but did not want to quit our own.”

Sonia: “The more Ismael and I talked, the more I knew that he was the one. When I had gathered all of my courage, I took a leap of faith and asked him if he wanted to have his family back. He simply looked at me and said “YES!”

We started dating again in January this year, and it was so different compared to the first time. Our characters had changed, we knew how to treat each other and most of all, we chose to do things according to God’s will.

In February, he gave me a promise ring and we got married at the end of May 2014. Everything was so much sweeter this time around. So many people told us that our eyes had been glowing on our wedding day. And although everything went perfectly, we were ready to make it work for the rest of our lives.”

Ismael: “The love that I have for Sonia is greater than before. I had made up my mind that I wanted to be with her for the rest of my life. I wanted my family back. Our marriage is a blessing.”

Sonia: “Ismael helps me around the house, he understands me, he shows me that he loves me and he is my best friend. What used to be my biggest nightmare is now my greatest joy. My marriage is proof that nothing is impossible. The happiness that we have cannot compare to the first time.”