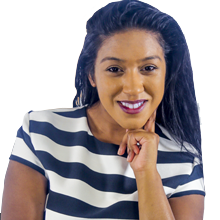 “I used to attend the youth group when I was younger. But I stopped coming after I entered a certain relationship. I was easily led astray, but I had convinced myself that everything would be fine, just as long as I was in that  relationship. However, it wasn’t long before that very relationship turned into an abusive one.

Throughout my suffering I remembered the church and I wanted to return. And although my life was never a bed of roses, I missed my time there. I literally lived on the road next to the church, but I didn’t have the strength to come back. Every time I would drive past, I would think about going in but my pride kept me away, as I was fearful about what others would say.

I kept on this way and the number of years I spent away from the presence of God only increased. I lived carefree but didn’t realise that things were about to go from bad to worse; I felt like every area of my life was being attacked. I also suffered with constant migraines and because of this I wasn’t able to work.

It was only sometime last year, when a friend of mine re-invited me back to the church, and I had told her that I would come, but in the morning that I was meant to go, I had a really bad migraine. So I was hoping that she would have forgotten.

Nevertheless, she came to my house that morning and just about compelled me to come. I ended up going and I cried throughout the whole service that day; I felt a bit awkward after returning to the church after so many years, yet I was glad to be back.

From the following day, I never experienced any migraines again. I then decided to take God seriously and began taking steps to move forward in my faith. I am now working and live in a lovely house with my daughter. I am also investing in my relationship with God and for the areas of my life to be completely restored.”