a wall of anger and resentment, change my life situation, change your life, facing family problems, understand what I was going through, Victory Youth Group, 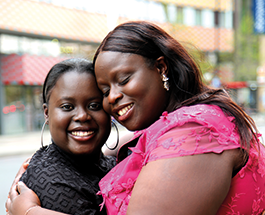 Leandra Rodrigues’ life was full of problems; she had a lot of inner  conflicts and a tremendous void within. Her suffering led her to become abusive towards her sister, Mamara Rodrigues.

Leandra, how was your life growing up?
‘I moved from my home country Guinea-Bissau to Portugal and due to the language barrier in school, children would bully me. Eventually, I had had enough of being the laughing stock, so in order to defend myself, I became aggressive. I had built up a wall of anger and resentment.’

How did these negative feelings affect your relationship with your family?
‘We eventually moved to the United Kingdom and that’s when the relationship with my sister started to deteriorate. I was the youngest of six siblings, so when Mamara was born all the attention from my parents diverted to her. Feelings of hate towards her started to grow, because I was jealous of how my parents would treat her. I felt like I was forgotten by them. That’s when I started to hit her for no reason. I remember there was a day that I beat her so badly she started bleeding. Today, I regret doing so. At the time however, I couldn’t have cared less. Every time I would do something against Mamara I would get a reaction from my parents and that was all I wanted.’

Mamara, how did you see your sister back then?
‘My relationship with Leandra was just non-existent. We were sisters but we were living like strangers in the same house. I couldn’t see her as my sister; I considered her as someone that I just had to say “hi” to. I never really held grudges against her but she was someone that wasn’t making any difference in my life. I knew I couldn’t count on her as she wasn’t there for me.’

Leandra, how did you go about changing this situation?
‘I was never able to talk about my problems to anyone; I felt that, if I tried to do so, they wouldn’t understand what I was going through. However, my mother invited me to a meeting at the Universal Church and, although I didn’t want to go at first, I agreed to give it a chance. During that meeting, I learned a few steps I could take to change my life situation, including forgiveness. I found out that I would never be able to move forwards without letting go of the grudge I was holding. Once I decided to let go and open up to the advisors, my life started moving forwards. Attending the meetings helped me to change from inside out. I decided to follow the steps I had learned and I eventually forgave my family and myself.

Today I am strong; I no longer have any insecurities or hold any grudges. My sister and I are the best of friends; I no longer lay a finger on her. I have peace inside of me. Never believe that God cannot change your life for the better because that was what I thought, but here I am today – a changed woman!’

Mamara, how would you describe your sister today?
‘I still remember the time my sister started to change. She started showing love towards me, being nice and doing more things for me. In the beginning it was weird because I wasn’t used to receiving kindness from her, but soon I noticed how much she actually cared for me. Her change inspired me to try to become a better person too. Through her change I was inspired to become more active in the meetings at the church. I also became more active in the Victory Youth Group, and that has boosted my confidence.’

By using faith and taking the necessary steps, Leandra and Mamara were able to restore their relationship as sisters. Are you also facing family problems? Join our Family Day every Thursday at 7am, 10am and 3pm.