“Seventeen, pregnant, on the run from my violent partner and I still went back”

a better life, a relationship with him, the Universal Church, 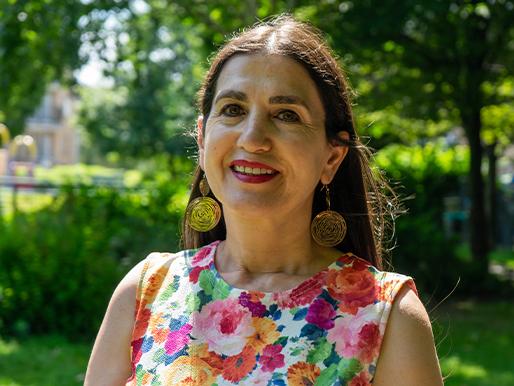 When your protector puts you in danger, nothing makes sense. Ashkhen Gulbekian didn’t have a happy or healthy childhood, her life was turbulent from the get-go. Her parents were extremely strict and she was afraid of her father.

“’Why does he beat me, why does he pick on me, why is he always angry?’ Were the questions I grew up asking myself. No matter what I did, I could never please him. My father hated me. So much so that at the age of 14 he saw me trying to end my life, and instead of stopping me, he went out and brought more tablets for me to overdose on!”

A troubled childhood led to Ashkhen leaving home at the age of 17. Not long after this, she fell pregnant with her first child, followed by her second only 16 months later. Despite being a bright student, early pregnancies pushed her to leave college.

“I was desperately lonely, I had no one and in my search for love, I fell into some terrible relationships. The father of my first two children was a violent man, who would beat me black and blue! I was afraid of him, but never ever had the courage to leave him. One day in a fit of rage whilst I was pregnant, he threw me out into the snow. I was bruised from his beating and in severe pain, with nowhere to go. After seeking help from social services, they put me in a women’s refuge, telling me there was no way I could go back to him. But, as a young impressionable teen, I listened to my mother’s advice and went back to my abusive partner. She said that as I was having his child, I couldn’t leave him; she told me I had to tell him where I was. ‘You’ve made your bed, now lie on it’, were her words!”

In the end, Ashkhen’s abusive partner got up and left; he walked out on his daughter’s second birthday. Ashkhen was relieved, she never had the courage to walk away, but him leaving was a blessing in disguise. Not long after, Ashkhen met the father of her third child. She was in and out of a relationship with him for seven years.

“As a victim of domestic abuse, my self-esteem was extremely low and my standards also continued to drop. My partner spent most of our seven-year relationship cheating on me. But I felt lucky to have him. I didn’t believe that life could get any better for me. He once cheated on me whilst I was in the next room; he had no respect for me and neither did I. I didn’t see my worth, and so by the time I was 25, I had two failed relationships, and ended up alone with my three children.

I felt so depressed that I couldn’t even get out of bed. I would just lay there day dreaming and fantasising about a better life. I felt stuck and hopeless; I was smoking heavily, something I had started doing as a 14 year old as a way to deal with the inner pain. And I was losing weight drastically. At this time, my daughter was a little older and so she practically raised her brothers through this period; I also had a very good friend who would come and cook for my children. I recognise now that one of the reasons I felt so low was because I had always felt unloved and unwanted.

During this time, I truly believed I had messed my life up, I couldn’t see where I was heading. I even got into trouble for shoplifting and ended up with a probation order. The shoplifting began when I met other young girls who were doing the same thing. It went on for a few years to the point where I even shoplifted for other people and sold the items to them for a fraction of the price. It took me getting arrested to stop committing the same mistake over and over again. Life felt like a massive burden that never ended.”

The turning point for Ashkhen came when she was invited to the Universal Church. There was a message at one of the meetings that struck a chord with her and it all made perfect sense.

“Upon hearing that God would bless the work of my hands, I thought to myself, ‘How can God bless the work of my hands if I don’t do any? I need to get a job for that promise to materialise.’ My mind opened up. Years of excuses took a back seat as I actively went out searching for work. At the Universal Church, my confidence and belief that I could make something of myself were boosted. I hadn’t felt this way in years! I had to make the decision to leave my old lifestyle behind, and that took a long time; it wasn’t instant but it happened.

Now, I am a fully qualified accountant, I am self-sufficient and financially independent. At the Universal Church, I was gently guided through my depressive moments and encouraged to find a true relationship with God. I now know that with God there is true happiness; where there is God there is peace. If the people that knew me then could see me now, they would most certainly say that I am a totally different person!”