Saved from the street life! 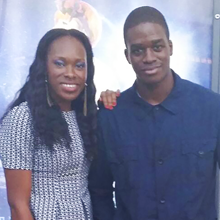 My brother was involved in many gang-related activities. He used to sell and smoke weed; he would get into a lot of fights with people around our area, so he would be out on the streets and carry a gun around with him for protection. He got kicked out of school and was put in prison for over a year for robbery.

It was really hard for my family and me; we didn’t want to see him in and out of prison and getting involved with the wrong people. We were worried for his life because he could have gotten shot or stabbed at any time.

I decided to take part in the campaign at the UCKG HelpCentre. It was difficult, but I disregarded my feelings and how hard it was because my brother was worth whatever it took to change him.

In a matter of weeks, I began to see a difference in him. He started having an interest in the UCKG HelpCentre, and turned up for himself. He began to take university seriously; he stopped selling and smoking weed. He began to take care of his health, got rid of the gun and cut off the friends he was hanging around with. He even started looking for a legitimate way to make money.

I have seen a huge difference in my brother. Taking part in the campaign for him was worth it.