attending meetings at the Universal Church, attending the church, I began to use my faith, it was too late, learn the power of faith, 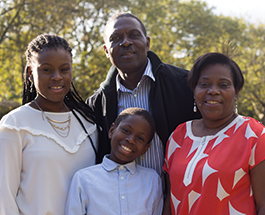 Lídia: ‘Just leave, get out! I can’t take this anymore.’ These were my last words to my husband. My words had inflicted more pain than anything I had ever done. He got up, took his things, and left. As he closed the door, I broke down in tears, regretting every word that I had said, but it was too late. The truth was that he had never done anything wrong; in fact, he was caring, loving, and did all he could to support me, and I was the one with the issues.’

Joāo: ‘I couldn’t believe my wife had just kicked me out of the house. I knew we were not sweethearts but reaching this point was troubling me. Sometime after I left, I began seeing various women, but I was never really at peace.’

Lídia: ‘To deal with the break- up, I began demanding attention from my so-called friends, but things only got worse because our friendship was based on gossip and lies. At home, I felt guilty because I couldn’t bear seeing my children miss their father – it felt like a stab in my heart. When would this pain ever end?’

“We are eternally gratefull to the UCKG”

Lídia and Joāo didn’t believe they would ever get back together, but what they didn’t know was that their eldest daughter, Dirce, was attending meetings at the Universal Church – including the Sunday services. As each month went by, Dirce began to learn the power of faith, and consequently, she became more confident that her family would be restored.

Dirce: ‘I really believed that my family could change due to hearing a story similar to mine where the family managed to come back together. I told myself that the same could happen with us too. I started to reach out to my family and I began to use my faith by attending the Family Day meetings on Thursdays. My goal was to see my parents back together one day.’

João: ‘I remember my daughter inviting me to the Universal Church. I was happy to hear that she still thought of me. That day, I attended the church and saw my wife, and from then on, a small spark kindled inside me. Later, my daughter told me that her mother would like to speak to me, so I went to her house and we opened up. I left and took some time to think about what was said, and after around one month we decided to get back together. Since then, we’ve never stopped attending the church and investing in our relationship. Today, our family has become a strong unit. We are forever grateful to the Universal Church because it has taught us the true meaning of family.’

Dirce: ‘Everything has changed because today we are connected to the right source of power: God. Now, I can proudly say that I have a united and happy family.’