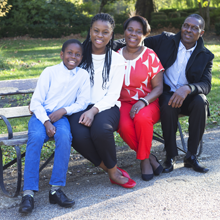 Agony and torment were the only things left after certain events took place in the Cassandra family. Never once did it cross their minds that there was hope after great despair. Find out how this family was able to break away from being one more statistic.

Lídia: “Just leave, get out; I can’t take this anymore.” These were my last words to my husband.

I saw his eyes looking down, searching for words, but my words had inflicted more pain than anything I had ever done. He got up, took his things, and left.

As he closed the door, I broke down in tears, regretting each word that I had said, but now it was too late. The truth was, he had never done anything wrong; in fact, he was caring, loving, and did all he could to support me, but I was the one with the anger and the deepest void inside. I thought that getting married would fix it, but in reality, it only made things awful.

Joāo: In my mind, I couldn’t believe my wife had just told me to leave. I knew we were not sweethearts but to reach this point was troubling me. After I left, I began seeing various women but was never really at peace.

Lídia: On the other hand, I began demanding attention from my so-called friends, but this was just another rollercoaster waiting to happen; gossip and lies were the foundation of these friendships. I would end up in serious arguments and grudges; these emotions built up inside me, and coming home and seeing my children miss their father was another stab in my heart. When would this pain ever end?

Lídia and Joāo didn’t believe they would ever get back together, but what they didn’t know was their eldest daughter, Dirce, was faithfully attending various seminars at the HelpCentre to receive guidance and encouragement to save her family. As each month went by, Dirce began to see changes in her mother and this gave her more confidence that her family reunion was closer than she thought.

João: I remember my daughter inviting me to one of the activities being held at the HelpCentre. I was happy to hear that my daughter still thought of me. That day, I attended the centre and saw my wife, and from then on a small spark began inside of me.

Later on, my daughter told me that her mother would like to speak to me, so we had a little encounter in the park. There we opened up to one another and after some time, we made the decision to get back together! I became intrigued by my wife’s and daughter’s new mentality and positive lifestyle; I accompanied them to the HelpCentre and have never stopped attending since.

Today, our family has become a strong unit. We are forever grateful to the HelpCentre because it has taught us the true meaning of family.

P.S Here’s a tip for those who are trying to cope with their inner problems: Surround yourself with positive people. The more time you spend laughing and socialising, the more you start to feel good about yourself, therefore worrying less. You should also try talking to somebody, whether a family member or a friend, it’s always welcoming when somebody listens to your problems.