No longer the average girl 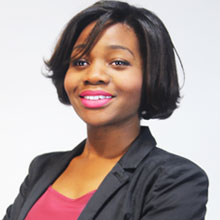 Average, mediocre, ordinary. Would you describe your life using these words? Do you respond to the question, “How are things going?” with, “They’re good?”

The norm is okay for you. Slow progression or none at all is not that big of a deal for you, just as long as you have a roof over your head, some food on the table and clothes on your back.

Well, what happens when good is no longer good enough?

Life was nothing out of the ordinary. I woke up, I went to work and I slept. My life consisted of a simple routine, where I would go to work in a job that I didn’t hate, but that I didn’t particularly enjoy either. It was “okay” but the truth is that it wasn’t enough. I struggled to provide for my basic needs. You could say that I wasn’t
really living; I was merely surviving. But don’t think that I was happy with the way my life was. On the contrary, if I had remained indifferent, I wouldn’t have a story to tell. It all started because I was fed up. I got angry. I was tired of only being able to make ends meet; I was tired of a mediocre life and I’d had enough of all that was ordinary. I wanted financial independence, something that would reflect greatness.

My anger had reached its tether, and I made a decision followed by an action of faith that changed my life. I decided that the route to financial prosperity was by having my own business. I wouldn’t have to work for anyone; I could decide my own salary; I could make up the rules.

I am a faithful member of the UCKG HelpCentre and it is in that place that God showed me what I had to do to get to where I dreamt of being. I knew that if I wanted God to bless me with something really great, then I needed to do something that would allow Him to do that. So I wanted to challenge Him in order to do something for myself; something that He would give that would belong to me. With my own business, I wouldn’t need to answer to anyone and above all I would glorify His name with it.

And so, Acacia Bridals was born—a business that provides tailor-made wedding dresses. It was astruggle getting it off the ground. At the start, orders were coming in so slowly that the business became the opposite of the blessing it was meant to be. I was unable to pay the simplest bills and was often late paying suppliers. It felt like I had to sweat blood to get the smallest result. I sunk into debts and things became extremely tight. I didn’t know what to do. I had started the business believing that it would add to my life, but instead, it was causing me more stress than I had before. This was definitely not what I had envisioned when starting the business. I felt like giving up, but then I would have been back at square one, with my face in the mud. I couldn’t let that happen. How was I going to revive this business and bring it out of the ashes? There couldn’t have been a more perfect time for the Campaign of Israel to arrive. It was my golden opportunity. I made a vow with God. Just as Jacob’s name was changed to Israel, I wanted there to be a transformation in my business. I wasn’t going to let God go until He blessed me.

I decided that I would literally give everything Acacia Bridals had. I sold every single wedding dress, every tiara and veil etc.—everything to the point that my office was just an empty white box—and placed it all on the altar. I also sacrificed some money that I’d been expecting; I wanted to ensure that I had nothing to rely on but God. My faith was that either there was a complete turnaround and God transformed Acacia Bridals into something worthy of being called a business, or the dream died.

Being a tither was the pinnacle of my financial growth. I was faithful to God, so I had the right to see the evidence of His blessings in my life. I would do my part and He would just have to do what I could not.

As a booster, I made a Chain of Prayer on Mondays. In these meetings, I was taught to use my faith to achieve the impossible and, within a short space of time, business was booming. Two of my tailors gave Acacia Bridals some sample dresses and the number of orders I was receiving increased dramatically, even without advertising.

People were now wanting Acacia Bridals to design and make their wedding dresses for them without them needing to come into the office and the clientele improved. I received so many orders that I even had to put some aside. Within three months after the Campaign, the business had made more than the income of the previous year altogether. I was able to pay off what was owed and I could finally breathe; I was free from the financial noose that had been hanging around my neck. But in the same Campaign, God showed me that I needed to use more of my talents; to use my background in events coordination and planning to expand even more.

Through the Campaign, I was blessed with a contract to do event coordination with a company that organises high-class events with ministers, politicians and key members in the finance and professional services sector based in the city.

Today, Acacia Bridals continues to have a high level of orders even with minimal advertising, to the point that I am now able to choose which orders to go ahead with and which not to. The financial pressure has been removed and God has proved that when we trust in Him, He is able to make a way even when it seems impossible. Money is no longer an issue and Acacia Bridals is supporting itself. My impossible business has now become more than possible! And even after the Extraordinary Campaign, I am looking forward to greater things. Watch this space!