My mum had to call the police on me

ready for whatever challenge, 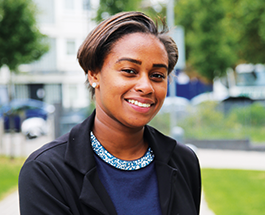 Amongst my four siblings, I am the middle child and seeing our parents at each other’s throat all the time reflected on us. We had bad feelings towards each other and would fight a lot. Once it got so bad, that I stabbed my sister in the hand during one of our brawls. This led to my arrest for GBH (Grievous bodily harm). I was always very angry.

My parents eventually broke up, and I blamed my mother for it. Everything was a mess.

Gradually, I began to seek the attention and love that I didn’t have at home elsewhere. I involved myself with a group of friends who were popular and being with them felt like ‘family’. I noticed that I could be more popular by fighting, so I took the anger from home to school. This violent streak got me kicked out of school just before my GCSEs. The event that led to my expulsion involved me grabbing a wooden stick with nails to beat a girl. We were in a group acting up but when it came time to face the consequences of that terrible act, I was on my own. I felt abandoned by my so-called friends and from there, I felt I couldn’t trust anyone anymore.

When I thought of speaking to my parents, I always felt like they wouldn’t understand me. I didn’t really have a relationship with my siblings, so I couldn’t speak to them either. I felt alone.

I would see people smoking, and a desire grew inside of me to try it, so I would pick cigarettes up from the floor and smoke them. Later on, I moved onto cannabis and would smoke it every day. It was the first thing I would do every morning and the last thing I would do every night. If I didn’t have it, I thought I would go mad. I depended on it to calm me down and to help me fall asleep.

At the age of 18, my mum had to call the police on me. I was arrested for domestic abuse because I was violent towards her. Out of anger, I smashed everything in the house until the whole place was upside down. I was out of control!

I tried to go to different places for help, but I felt I wasn’t getting the support that I needed. It felt like there was no hope for me. It came to a point where I would constantly cry, and I just wanted to end my life, but I was too afraid to do it.

I knew about the UCKG HelpCentre from a young age because I would walk past the building, but I never imagined that they could ever be able to help someone like me.

One day, I felt like something was drawing me in; telling me to go inside so, I did. I took part in one of their meetings, and I could relate to what was being said; I heard that I could be happy again, which motivated me to return to the church.

I began attending the Sunday meetings for Empowerment amongst other weekly meetings. I was taught that, in order to be happy again, I had to first let go of the things that were having a negative effect on me – people, addictions, grudges – and choose to forgive. I had to let go of all the emotional baggage that I had carried over the years. It wasn’t easy because that’s how I had been living for a very long time, but I knew it was the only way for me to be free.

Gradually, I began to see a change in me; I realised that I was no longer angry or craving weed, and I didn’t need anything to make me fall asleep because I began to sleep peacefully. I no longer felt like ending my life, and my family also began to notice a huge change in me.

I continued working on myself, and I can say that, today, I am completely different. Now, I wake up ready for whatever challenge comes my way. I have peace and happiness that comes from within me. There has also been a great improvement in my relationship with my family; we can now all be in the same room without wanting to kill each other, and when problems do arise, I no longer lash out – my reaction is totally different. I know this is only the beginning for me’.

Can you relate to Karry’s story? We believe that no one is beyond help and every day is an opportunity to start afresh. Join us this Sunday at 10am. See it as a new chapter in your story.