Life after the rain 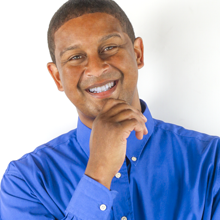 According to the Mental Health Foundation, ‘a quarter of the population will experience some kind of mental health problem in the course of a year, with mixed anxiety and depression’ —the nation’s most common mental disorder.

Depression is so much more than just having a bad day or feeling a little blue. The disorder that effects one in five people is so intense that it leaves sufferers feeling so despondent that sadly, often times, taking their own lives seems to be for them the only feasible answer. In fact, Stuart Skeete knows firsthand what it feels to suffer with depression. “From a young age, I was bullied and put down because of the sound of my voice. This destroyed my self-esteem. I hated what I saw when I looked in the mirror, and saw a boy who I thought was worth nothing, staring back at me.

My depression deepened when my father passed away when I was 15, during the year that I was supposed to meet him for my birthday. I hadn’t seen him since I was 12 years old. Seeing the grave was painful and his death affected me greatly. I gave up on my last year of secondary school. The bullying had gotten worse in all three schools that I’d moved to.

Family life was difficult. My mum was struggling financially and everywhere we lived got broken into. When I left Barbados and moved to London to live with my sister, we were like two strangers under the same roof. Our relationship was strained, as I felt unloved, but we restored our friendship after I wrote a letter to her expressing how I felt.

Yet, I was still depressed. I had no goals in life and the burden of sadness was so heavy that I contemplated suicide. Each time I thought to walk out into traffic or swallow bleach, I would use football as my escape. The battle in my mind was fierce. I learned to cope with this mental battle daily, but death was always so close—it was always an option.

It was my passion for football that pushed me to hope. One of my favourite footballers had scored a goal and pointed his hand to the sky and I wondered what it was that made him so great? I wanted to be like that. I was discussing it with a close friend and member of the UCKG HelpCentre who said that it’s because he probably has God with Him, and that’s when she mentioned the church to me.

I first started coming for the Independence Project where I heard about having confidence in yourself and your abilities. But then I went to the Spiritual Cleansing session, and on one particular Friday, a prayer was made for those who felt depressed. I remember being one of the first five people to go to the altar.

When the Bishop asked who felt like taking their own life, I felt like someone had told him about me. I stood up and thought I had to go. I couldn’t keep it in because I wanted to be different.

He put his hands on my head and made a powerful prayer for me. But even more life changing than that moment were the words “let it go”.

Those few words rang enough for me to realise that I needed to let go of everything that had happened to me. I understood that the total change I was looking for would take time, but the start was for me to free myself from the past and I had to decide that I had to let it go regardless of how heavy the burden seemed.

I left there with a newfound strength. All the memories and regret and heaviness from not being able to say goodbye to my dad went. And daily, the darkness and negativity that was constantly plaguing my mind seemed to get weaker and weaker, and I was getting stronger and stronger to the point where today, I am telling others they can be free like me.

The way I saw and thought of myself is gone. I don’t feel like taking my life. I even vowed to God that no matter what obstacles I face, I won’ t give up! I’m a football coach working with young people, inspiring them to also be and do whatever they dream of, and I’ve published two books. I’m pursuing my dreams now rather than putting myself down. I’m happy. I have self-control over my anger and I’ve found new ways to tackle difficulties.