I decided to fight for my marriage 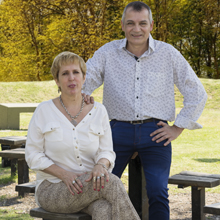 Roberto Santellán found difficulties in all aspects of his life. From a very young age, he suffered with rashes all over his body and was put on a water diet in an attempt to resolve the problem, but the rashes kept coming back. During the nights, things were not better. He had frequent nightmares and experienced sleep levitation. When it came to his finances, Roberto restored to delivering bread as a way to make ends meet. No matter how much he tried to progress, I just never seemed to move forward.

‘All of these hardships came to an end when I found faith and started to attend the UCKG HelpCentre,’ he said.

‘When the Campaign was announced, I decided to sacrifice on the altar. As a result, I finally began to see progress.

I was able to buy my own van and I opened a bakery and a confectionery. A few years later, I expanded and added a coffee shop.

Despite this success, what troubled me the most was the fact that I had been in the presence of God for 11 years, but my wife still did not accept my faith. She had attended the church for a while, but she left soon after. She did not want me to be faithful to God or to continue going to the UCKG.

Two years ago, she confessed that she had cheated on me. This broke me; we started fighting a lot. I lost trust in her. I wondered whether I could be happy with someone else. I did not believe that there was anyone else out there for me. Thoughts of separation bombarded me. I couldn’t be with someone who didn’t love me anymore.

I prayed, I kept going to church, and I decided to fight for my marriage. God strengthened me. I had the assurance that through faith, I could get my wife back.

My Chains of Prayers, purposes and sacrifices that I made eventually gave me the result I wanted. I had my wife beside me, not only physically, but also in spirit and in faith. She had turned to God and had decided to follow Him.

I felt like I was losing my mind for a while, but I never lost faith in God. He returned to me what I loved the most after Him: my beloved wife. Today, we are one – God restored everything.

Now, my wife and I go to church together. I speak about God to her and we read Bishop Macedo’s books together. I can now pray at the dinner table with my family, and it’s never a problem. This alone was one of my biggest dreams and today it’s a reality.’