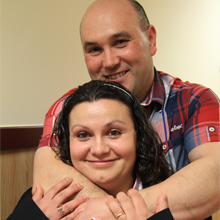 It can wreck the family home, consume one’s finances, destroy the body both inside and out and cause the mind to become a desert and wasted organ. Ricardo Perestrelo shares his story with Universal, telling a gripping tale of how he met, got sucked into the trap of and overcame the modern-day assassin: Drugs.

Living at home felt like being caged in a box with the oxygen slowly being released. My parents were overprotective and controlling, and I felt smothered by them. I had to be home at a certain time; they monitored who my friends were and didn’t give me any pocket money.

So as a frustrated 16-year-old, I rebelled. I didn’t care who I was or wasn’t allowed to hang around with. I made friends with my neighbours as we were in the same classes together, and after school, I would go to their house to smoke. There was no way I would ever admit doing this to my parents, so I told them I was studying.

From the day that I tried my first cigarette, I was hooked. I would smoke every day and later on, I started smoking hashish. It was easy to get hold of it because my friends were always offering it to me.

When the time came to go to university, I moved away and got a job working in a bar. Now I had money and I could do whatever I wanted with it. This was how I started getting into cocaine, heroin and ecstasy. I could afford it and I wanted more than hashish and cigarettes. With time, my friends started to frequent the bar I worked at. We had a deal; they didn’t pay for their drinks and in return they gave me the drugs I wanted for free.

Unlike in my parents’ house, there was no one to control me or tell me what to do at university, so I had free reign over my life. I partied all night and missed classes in the morning. Overusing drugs made me sleep a lot. I would always tell myself that I’d go to class the next day or find out what was taught from a friend, but I never did. This became a vicious cycle that I found myself trapped in, but my careless lifestyle meant that, by the time my course was over, it was inevitable. I had failed.

With nothing left to do, I moved back to the town I grew up in, and quickly got back in touch with my old friends. When I was 25 years old, I met Carla.

I remembered her from our childhood because she lived in the same area as me, but we hadn’t seen each other for six years. So seeing her face again at a cousin’s wedding was an unexpected, but pleasant surprise. We started dating and when we got married, we moved to London. But if you think my drug addiction stopped, you’re wrong, for an addiction is exactly what it had become.

In less than a week, I’d made friends who were drug users. Despite wanting to quit, I had no willpower to do it. The more time that went by, the more I smoked. It was much easier to get drugs in London. I would smoke weed, hashish and snort cocaine, spending £40 a day to satisfy my addiction.

At the start of our marriage, my wife soon found out about my habits, but I lied to her so that my addiction didn’t sound as bad as it truly was. I told her that I sometimes smoked one cigarette of hashish and she believed me.

I wouldn’t smoke or take drugs at home, so I would do it all at work with my friends. I carried them with me wherever I went and was always coming home late into the night.

Of course this didn’t go down too well with my wife and she soon realised that my little hashish cigarette every now and then was much more than I’d been letting on. Over time, things got worse between us. Seven years of marriage was now hanging by a thread. I was verbally aggressive and we would always be arguing. We would go for weeks without speaking to each other; she had even started sleeping in our daughter’s room! But in the midst of family and friends, we were able to hide the fact that our marriage was on the brink of divorce.

While my life was the mess that it was, my uncle kept inviting me to some place he was going to, called the UCKG HelpCentre. But whatever it was, I didn’t want anything to do with it, yet he wouldn’t stop. At every opportunity he got, he would bore me with yet another invitation. He refused to take “no” for an answer and I eventually got sick of his pestering, so I went to “keep him quiet”.

However, I was surprised because it wasn’t at all what I expected. Although I had preconceived ideas about the place, I couldn’t help liking the message and the way the meeting was held.

It was a Sunday morning and the man standing at the front was talking about making a challenge for 13 Sundays. The aim was to attend the session for those 13 weeks and if nothing changed in our lives, then we didn’t have to go back to the HelpCentre. This sounded interesting, and I decided to accept the challenge. I took the Chain of Prayer card and when I got home, I told my wife about everything I’d heard. We decided to start going to the sessions together. In the first few weeks, I was sceptical; I didn’t believe everything the spiritual adviser said. Plus my attitude hadn’t changed, and I would still smoke a cigarette laced with drugs right before leaving my house to go to the meeting.

But with time, I started paying attention to the testimonies that people were giving. I was learning about God and I slowly believed everything I was being told. However, the only thing I doubted was that I would never stop smoking. I had tried many times, but the craving never went away and I always gave in.

The last meeting of the Chain of Prayer happened to take place on the New Year’s Night Vigil that the HelpCentre holds every year. The adviser had told us that not seeing any changes shouldn’t be an excuse for us not to attend. I didn’t want to go and when I got there I didn’t want to stay either, but my wife insisted. Funnily enough, I was one of the last people to leave. I will never forget that moment.

It was 6:30am and all I could think of was what I’d heard in the meeting. I was shocked; I was used to smoking all the time, but I hadn’t taken drugs for the whole day. I decided that from then on, things would be different.

Everything changes when you make a promise, and the very next day, I took the drugs and flushed them down the toilet. I knew what had happened in the night vigil, how my heart had been convicted, and I threw myself into God’s arms without doubting. The only thing that I wasn’t quite over yet was tobacco.

A purpose called the Campaign of Israel was later announced and I understood the meaning behind it. I took the envelope and decided that I was going to do all that it took to overcome that final addiction.

I would go to the HelpCentre every Monday, Wednesday, Friday and Sunday morning. I needed as much strength to keep going as I could get, and the messages given in the meetings were motivating.

After three weeks, I stopped smoking. I had no thirst for it anymore. I grew ever more attentive in the meetings and because I’d tackled the source of the problems in my marriage, things between my wife and me got much better. The arguments had always been over me staying out late and taking drugs, but seeing as I’d beaten my addiction, there was no need for me to be away from home anymore. I would help my wife in the house during the times that I used to hang out with friends, and this brought us closer together. After two months, my wife became a regular member of the HelpCentre, and this brings me so much joy.

It’s been four years now, and every area of my life is a success. I have my own butcher shop/ mini-market, which I run in partnership with my uncle, the same man who invited me to the HelpCentre four years ago. It is doing very well. I’ve acquired more clients—pubs, restaurants and schools want my service. Because business has been great, I was able to buy a house back home and a property here in London.

I’ve faced many battles, but I’m always certain that I will overcome them all. I’ve realised one thing through this journey: no matter how big your problem is, God is greater than them all.