Breaking the cycle of abuse

change my life, I really had to fight for the happiness that I wanted, It was not an easy journey, 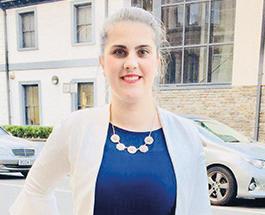 Born in Romania to a single mother, Andreea Surpanu was extremely curious about her father. Growing up, she was told he lived in Portugal because of work. Her mother also left to follow him there, only to find out that he had another woman.

‘At 15, I decided that I wanted to meet my father, so I moved to Portugal. However, after staying with him for less than a month, his girlfriend became violent towards me. I was shocked and horrified, so I left to live with my mother – who had returned to Romania after his betrayal.

At that point, my life got worse. My mother had an abusive boyfriend who constantly hit her to the point of drawing blood. I was extremely frightened. The situation only intensified: I witnessed her being threatened with a knife. I was traumatised. What if he killed her? Would I be next?

I would continuously beg my mother to run away together, but she did not want to leave the house, as it was in her name. “Mum, please, our lives are worth more than this house,” I would plead. It was absolutely horrifying. I would often think about how long we would have to continue living like this.

We then moved to my uncle’s house, where I started to be rebellious. I made friends with the wrong crowd and was influenced by them to drink, smoke, disrespect others, etc. Although I was in my family’s home, there were times when I was not allowed to eat.

On several occasions I went hungry and starved. So, in order to forget my problems at home, I consumed things that were not good for me. However, this only led me to get into trouble with my family, which in turn resulted in them becoming violent towards me.

When I turned 18, I moved out to live with an elderly couple who abused me verbally and asked me for sexual favours. I could not understand why all this was happening. Was I cursed? I felt suicidal and that was the state I was in when I came to the Universal Church. In desperate need of help, I said to God, “If You do not help me, I am going to kill myself!” I could no longer live in such suffering. I was ready to do whatever it took to change my life. I first had to change my mindset – the way I viewed life – and start to believe that things could change.

It was not an easy journey, I really had to fight for the happiness that I wanted. However, as I eventually started putting all that I was taught into practice, little by little, I began to see changes.

Today I am different: I no longer need to drink away my memories. I get along with my mother, I am happy, and I am now able to help others who may be going through the same things as I once did. I used my faith to see God’s promises be fulfilled in my life.’