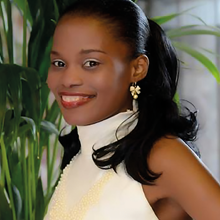 A traumatic past growing up, reflected on the woman I became later on in life.

I had low self-esteem and insecurities because of the sexual abuse I suffered when I was 12-years- old. My mother and stepfather’s relationship was plagued by physical, emotional and verbal abuse, so I decided to never get married.

I dated without commitment, but I couldn’t shake the thought of how nice it would be to settle down.

I thought I’d found happiness with the father of my kids, but our relationship was hell, and the same thing I saw in my parents’ relationship, happened in mine.

After I ended the relationship, I didn’t think I would ever find love; but that was before I knew about the Campaign of Israel at the UCKG.

The UCKG helped me to work through my past issues and change the person I was inside. The Chain of Prayers and one–to–ones gave me strength to overcome my past but when it comes to my love life, the Campaign was the key.

I took part in it inviting God to guide me as I’d gotten it so wrong in the past.

Gradually, I began to believe that there really was someone out there for me. Never in my wildest dreams did I imagine that the person who I invited and brought to the HelpCentre would be my husband today.

Daniel had problems of his own and I gave him the same opportunity to change as I. As he overcame his issues one-by-one, I became attracted to him. When I found out that he also felt the same, I was amazed. We dated and as they say, the rest is history.

Taking part in the Campaign was worth it. It guaranteed me a long-lasting relationship. I don’t have words to describe how happy I am.