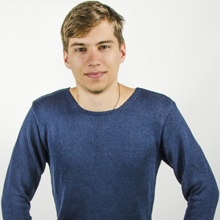 Marius Nichiforeac discovered a talent that he never knew he had, until he tried. Read about how the discovery of this talent made him the happy young man he is today.

“I was a real life puppet; that’s how you could have described me back then. I didn’t have a mind of my own, and like a parasite, I would feed off the character and behaviours of my ‘friends’! However, being influenced by them only made my life worse.

Away from my family and my home country, I had nothing but £300 that my parents would send to me. You could say that I was surviving in England, rather than actually living here. Loneliness was my faithful companion, and the need to be in the company of others drove me to the wrong crowd. Before I knew it, I was smoking and becoming just like them.

The distance from my family was hard enough, but when my dad told me that he was divorcing my mum, it was as though my whole world fell apart! My parents were like my pillars and the thought of them separating tore me into pieces! It was in that moment that I realised that I could not remain in the same situation.. I needed help and that is when I came across the UCKG HelpCentre.

Because of the bad company I kept, I was very resistant to commit myself to the advice and direction that I received in the meetings. Eventually, I recognised that my friends were not helping me, so I decided to give the HelpCentre a try for real.

I couldn’t believe I had wasted so much time! I learnt essential things, such as how to pray, fast and most importantly, how to use my faith! I was equipped with the spiritual armour that I needed to go out and conquer the blessings that God had promised for me, and one of those promises is prosperity.

Although my life was now taking a new direction, my finances were still in ruins! The £300 I received from my parents was barely enough to survive.

However, through the Independence Project meetings , I gained the courage that I needed to stand up on my own feet and go and look for a job. I started off as a cleaner in a restaurant washing dishes. I’d learnt in the meetings to always give my best in all I do so, though it wasn’t my ideal job, I did just that! And it got me noticed because of my work ethics.

From washing dishes, I moved up to cutting the vegetables and from there, an interest in cooking sparked within me. I even started to help out. The company noticed that I had a talent in culinary art, and offered to pay for courses for me to improve the skills I didn’t know I had.

Now when the head chef is not around, I run the kitchen! What started out as tedious and tiresome became a job that I love! I am now a sous-chef.

Today, I cannot even recognise the person that I used to be. I have changed completely! I no longer smoke, or hang around in the wrong company. I have prospects for my future and one of them is to open my own business to help support my parents, as they supported me. I am no longer a puppet and now have a mind of my own. I know that now that I have God on my side, I can do all things!